How Big Organizing Can Change Everything 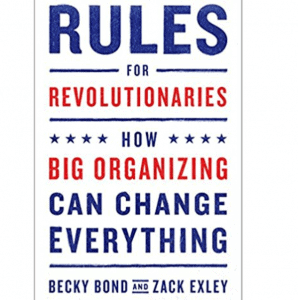 Rules for Revolutionaries is a bold challenge to the political establishment and the “rules” that govern campaign strategy.

It tells the story of a breakthrough experiment conducted on the fringes of the Bernie Sanders presidential campaign: A technology-driven team empowered volunteers to build and manage the infrastructure to make seventy-five million calls, launch eight million text messages, and hold more than one-hundred thousand public meetings―in an effort to put Bernie Sanders’s insurgent campaign over the top.

Bond and Exley, digital iconoclasts who have been reshaping the way politics is practiced in America for two decades, have identified twenty-two rules of “Big Organizing” that can be used to drive social change movements of any kind. And they tell the inside story of one of the most amazing grassroots political campaigns ever run.

Fast-paced, provocative, and profound, Rules for Revolutionaries stands as a liberating challenge to the low expectations and small thinking that dominates too many advocacy, non-profit, and campaigning organizations―and points the way forward to a future where political revolution is truly possible.